You are here: Home / Recipes / Christmas / The ghost of Christmas past – and that perfect roast gammon recipe again 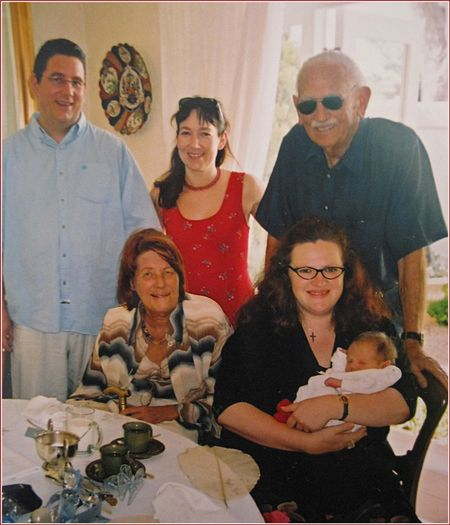 I am an obsessive recorder of events – both in writing and on film.  One look at my numerous boxes and albums of photos will confirm this beyond a shadow of a doubt.  My husband sees it as some sort of strange hoarding instinct – I see it very much in the same way as pressing flowers between the pages of a book.  It is my way of trying to capture a fleeting moment or emotion; to record an event that will later seem as dim and distant as something viewed through the wrong end of a dusty telescope.  But one glance at a photograph of the day and everything comes back in sharp focus.

Above, I am pictured with my family on Christmas Day 2002 – my brother Anton, my dad, my darling sister-in-law Paola, my nephew Sam (who was less than amonth old at the time!) and my mom sitting directly in front of me.  The photo lives by our front door and I see it every day, but at Chirstmas time, I seem to look at it more frequently because this was the last Christmas that my mom was alive, and I miss her more at Christmas time than any other time of the year.  I don’t think any of us realised that she was the glue that held our Christmas celebrations together, and that without her, nothing would ever be the same again. I think often about how our family Christmas routine was as fixed as the stars in the firmament (but no less eagerly anticipated for all that!) and how I never thought it could ever change.  How wrong one can be.

I posted the piece below a couple of years ago, but a) I’m feeling nostalgic; b) I think it deserves another outing; and c) it’s Christmas – so here goes: one more time, with feeling.

“We always celebrated Christmas at home.  I think I can count on the fingers of one hand the Christmases we spent away from home, up until my mom passed away:  three!  Once I was in London, once we went to my sister-in-law’s and once my dad had the truly insane idea of taking a cruise on the ill-fated Achille Lauro cruise ship, which deserves a whole post to itself – another time, perhaps.  But for the rest, there was an absolutely fixed ritual to Christmas.  On the 24th, my mom would retrieve from the fridge the gammon that she had selected for that year’s feast and put it in the oven for what to me seemed like an eternity.  The entire house be redolent with the mouth-watering smell of slowly cooking smoked pork and to me, that would always signal the start of Christmas celebrations.  The night of the 24th we (my parents, my brother and I) would all go out to dinner.  For most of my childhood we went to the same restaurant, La Fontaine – the kind of place where the maitre d’ always greets you by name, where there is a pianist tinkling away softly in a corner, and the ladies are each offered a flower when they arrive).  The menu would today be considered a 70s retro revival – seafood cocktail, chateaubriand, crepes suzette…but at the time it seemed to me to be the height of sophistication.  And before the meal, you would get not breadrolls, but slices of home-made melba toast and little butter balls!  Styling. Anyway, after an evening there, we would clamour for my father to drive us downtown to see the Christmas lights and from there, home to put out a mince pie and a glass of port for Father Christmas (or Kersvader, as he is called in Afrikaans).

Christmas morning my brother and I were always up at the crack of dawn and racing to the Christmas tree before we were even properly awake.  But the only things we were allowed to open then were our lucky packets.  Any other South Africans remember those?  CNA used to sell them and they were basically like a giant Christmas cracker, full of cheapish toys that would keep small kids amused long enough to keep them off the wrapped presents until Mom and Dad woke up.  8 a.m. was the watershed.  That was when we were allowed to take the pillowcase (yes, you read right, we each got a pillowcase, not a measly stocking…!) of gifts from Father Christmas through to our parents’ room and wake them up so that they could watch us slowly extract each gift.  Once that was done, we all had to get dressed and my parents would annoyingly insist that we all had to sit at the table and have tea and mince pies before finally heading for the tree and it’s treasure trove of gifts.  And only after I had handed round all the presents (for that was my self-appointed role) and everything had been opened and thoroughly inspected, could we move on to the next stage:  the feast!

We had the same Christmas lunch, with a few variations in the starter and dessert departments, pretty much my whole life.  After the gift-opening, my mom would head for the kitchen and remove from the fridge the enormous glazed gammon.  Then I would help her decorate it with whole cloves, pineapple rings and glace cherries and it would be surrounded by salads which also remained pretty constant through the years:  asparagus, potato salad, watermelon balls, and melon & grape salad.  Once my brother met his future wife, she added another component that was to become a fixture: her 7-layer salad.  The starter varied – chicken liver pate, smoked salmon in some form, or a plate of antipasti.  But always cold.  And of course, then came the main event.  First my dad would open the champagne, shooting the cork right into the garden, where my brother would always be waiting to catch it; and then he would get down to the serious business of carving the cold gammon.  I remember the Christmas gammon being one of the tastiest things in the world.  I loved the saltiness of the meat, the sweet stickiness of the glaze and the yielding, delicious layer of fat.  Of course, afterwards there was always dessert – usually Christmas pudding with my mom’s home-made brandy sauce.  But to me, the gammon was the thing; that was the taste of Christmas and I doubt whether that will ever change.  When my mom passed away, she had already selected the gammon for a Christmas meal that she would not live to see.  I found it in the freezer that Christmas when I went home and that was the first gammon I cooked, as a tribute to my mom and as a source of comfort to myself and my family.  I realised then how many things I had never got round to asking my mother – things like why did you never study medicine?  Did you ever regret breaking off your engagement? Or how do you roast a gammon??  What the hell goes into the glaze?  How do you get the fat just right?  So many questions, but no Mamma to ask.  I think that’s one of the first times I realised how irretrievably gone she was.”

In the intervening years, I have come pretty close to perfecting my roast gammon, and every year when I cook it, I feel as if my mom is there with me, even for a little while.  It’s the one ritual from our lost family Christmases that I can carry with me wherever I go.

I wish each and every one of my readers and friends a blessed, peaceful and merry Christmas filled with laughter and love and life.  Eat well, laugh expansively, and love your family as fiercely as you can. Rinse the gammon and pat dry.  Place it in a large roasting dish (preferably deep, with a lid).  Chop the carrots, celery and onion and place them in the roasting pan together with the gammon and the spices.  Add 1 to 1.5l water to the pan, depending on how deep your pan is.

If your roasting pan has a lid, cover it (alternatively cover the gammon with aluminium foil) and place in a pre-heated160C oven.  Cooking time is 30 mins for every 500g, plus an extra 30 mins.  I removed the gammon from the oven and allowed it to rest for 5 mintes while I made the glaze.  For the glaze you will need:

Heat them all together in a pan until the sugar has completely dissolved (the quantities are kind of variable – I add more sugar if the glaze is too watery).  In the meanwhile, carefully peel the skin off the gammon.  Lift a corner and tug gently – you will see it comes off surprisingly easily.  I then score the fat to create a diamond pattern – the pattern is a matter of personal choice, but the scoring helps the glaze to stay on the fat instead of just sliding off.  Baste the fat liberally with the glaze and return the gammon to the oven, uncovered.  Baste frequently until the glazed fat has browned nicely (it should take about 15-20 mins)- you can always use the grill to finish it off.

If you want to serve the gammon with a whisky gravy, see the gravy recipe at the end of my original post.

** Please don’t forget that Menu for Hope 6 finishes today – if you haven’t already done so, please check out the fabulous list of bid items and see my instructions on how to place a $10 bid.  I have donated the BloggerAid cookbook – please consider making a bid for it as it would make a fabulous belated Christmas gift to yourself or a friend! **