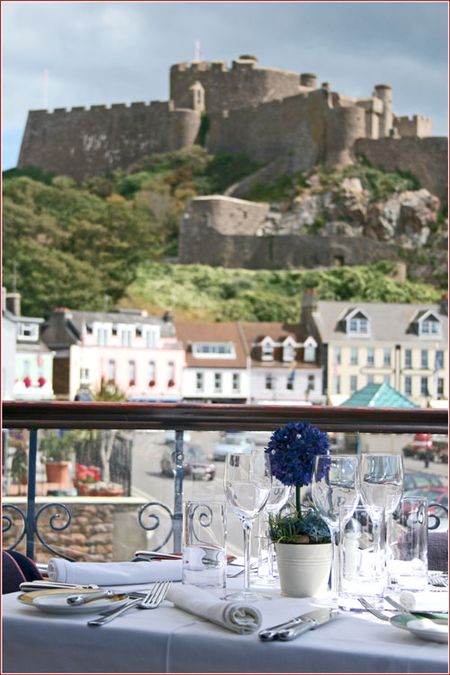 I must confess that before my husband’s best friend John moved there, I would have been hard-pressed to pinpoint the Channel Islands, and specifically the island of Jersey, on a world map.  And it appears I am not alone – when I tell friends I am off the Jersey for the weekend, the most common reaction is: “But isn’t New York quite far to go just for a weekend?”

In fact, the island of Jersey is in the English Channel, a whole lot closer to the French coast of Normandy than it is to England.  It’s an interesting place – part of neither the UK nor the EU, but rather a British Crown Dependency, which means that it has its own system of government, its own currency (although UK currency is accepted) and even its own internet domain (.je), although all its citizens remain British citizens.  Despite being English today, the island retains much of its French heritage which is a result of annexation by Normandy for over 200 years and its physical proximity to France (many islanders make day trips to Cherbourg in their small private boats).

The island is a financial centre but also a successful tourist destination with much to attract visitors.  There are miles of beautiful golden sandy beaches (particularly at St Ouen), the world-renowned Gerald Durrell Zoo, a vineyard, a lavender farm, miles of excellent cycling along the narrow tree-lined lanes, coastal cliff paths and historical fortifications and castles.  And it was towards one of these castles that we headed for a summery lunch yesterday afternoon.

Suma’s is a little gem of a restaurant and a sister establishment to Longueville Manor, overlooking Mont Orgueil Castle and Gorey harbour.  The harbour is a picturesque collection of small pleasure boats and yachts, bordered by a pretty promenade of houses and restaurants on one side and a long sandy beach on the other.  The castle was built in the 13th century to protect the island from French invasion and has been restored in order to give visitors a glimpse of what life was like for the original inhabitants of the castle.

But enough of the scenery – we had more important things on our minds, namely lunch!  Thanks to our friend John we had secured a table on the small terrace, so we were perfectly placed to enjoy the sun and the view while considering the menu.  I was pleased to see that there were many dishes on the modern European menu featuring local seafood and produce, and I was very pleasantly surprised to see that they offered a three course set menu for under £20 – fantastically good value in my book.

First up, while we enjoyed our pre-lunch drinks and perused the menu, was a bowl of excellent olives and a basket of bread, freshly baked on the premises.  The selection was impressive – foccacia, wholewheat walnut, and red onion and thyme bread, accompained by salted butter and a hummus-like chickpea spread.  If I didn’t have to save some space for the meal, I would happily have munched on this (particularly the onion and thyme bread) all afternoon.  The wine list included a number of wallet-friendly options both in the red and white categories, and a good selection of both New and Old World wines.  In the end we plumped for a bottle of 2007 Cable Bay Sauvignon Blanc, which turned out to be exactly what I want my Sauvignon Blanc to be – more gooseberry than green pepper, and an outstanding accompaniment to the seafood that was to follow. I started with some locally-dived scallops on a bed of lightly dressed salad leaves.  This was a form of sweet revenge for every time I’ve eaten “seared” scallops that were cooked to death, or frozen scallops that were just big, vaguely salty sponges.  Oh no, these were the real deal.  They had a seared crust on the outside that spoke of a properly hot pan, and were sweet and flavourful on the inside that spoke of properly fresh scallops barely out of their marine home.  Perfect.  Nick opted for nine locally cultivated Royal Bay oysters served with a traditional shallot vinaigrette and half a lemon beautifully wrapped in muslin.  The oysters were beautifully shucked without a hint of grit in them, with a creamy texture and a mild taste – not overwhelmingly salty like some oysters can be – Nick loved them. For the main course, I elected to stay with seafood – and even then I was spoilt for choice: it was tough to say no to the monkfish cheeks with pork belly and a langoustine & Madeira sauce; or the local lobster, prawn and crab salad.  In the end, though, the winner was the pan-fried fillet of brill on saffron noodles with samphire, scallops and local crab sauce.  This came as close to perfction as any seafood dish I can remember.  The fish was perfect (just-cooked moist flakes with a perfect golden crust), the noodles actually tasted of saffron rather than a cheaper alternative, and the crab added a sweetness that was perfectly balanced by the salty strands of samphire.  My carnivorous husband, on the other hand, chose the rib-eye steak with chips, roast tomatoes, mushrooms and a Madeira sauce.  One taste of the steak reminded me why people actually order steak in restaurants: seared on the outside, perfectly pink in the centre, and absolutely packed with flavour. After all this, you’d think I might not have room for dessert… but you’d be wrong!  How could I possibly turn down the option of local strawberries with a good dollop of Jersey cream?  As with the scallops, the strawberries were the perfect antidote to every half-ripe, over-chilled, flown-around-the-world strawberry you’ve ever eaten.  They were strawberries as God intended them to be – brilliant red, properly ripe, and bursting with sweet flavour.  What more could you want? All that remained was for us to ponder how reasonable the bill was (£120 for two, including wine and service), to sip our Jersey Cream Liqueur (made locally at La Mare Estate from an apple brandy base – think Bailey’s with cinamonny apple flavours), to watch the comings and goings in Gorey harbour, and to contemplate the upside-down refraction of Mont Orgeuil castle in our wine glasses. The service at Suma’s is outstanding (we had the lovely manageress Katja serving us), and everything that came out of chef Daniel Ward’s kitchen was exemplary.  The menu provided us with an agony of indecision, and it was great to see such a selection of local ingredients used.  The setting is lovely enough to make a meal feel like a mini-break – it’s hard to believe you less than an hour’s flying time from London. And after lunch, why not do what we did and wander along the harbour promenade to sit in the sun on the sea wall below Gorey castle, just enjoying an island escape. DISCLOSURE: This post was created as part of the August 2009 Foodbuzz 24, 24, 24 event and I received reimbursement for my meal.  CookSister previously participated in this event with a Burns Night dinner in January 2009.