You are here: Home / Recipes / Canapés / Celebrate Scotland with a Burns Night dinner 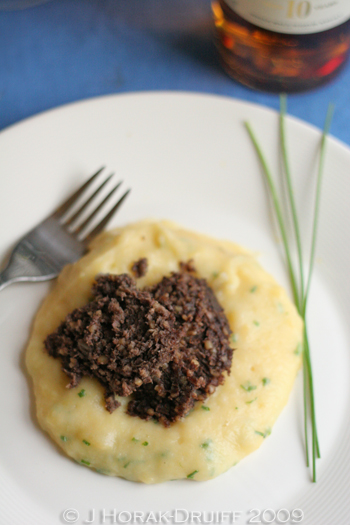 In the flickering candlelight, there is a man in a skirt approaching me, carrying both a knife and a stuffed sheep’s stomach, and somewhere in the background I can hear a sound like a cat strapped to some Mediaeval instrument of torture.

And no, I’m, not being inducted into some arcane pagan society.  I’m celebrating Soctland’s favourite son, Robert Burns, with a traditional Burns Night dinner!

Poet and lyricist Robert Burns is probably best known as the author of Auld Lang Syne, and is widely regarded as the national poet of Scotland.  He is the best-known poet who wrote in the Scots language but he also wrote in a light dialect and in standard English, which made his work accessible to a far wider audience.  In 1801, five years after his death, some of Burns’ friends and admirers decided honour the departed poet with a dinner. They did it again the next year, and the next; by the early 19th century, Burns Clubs all over the country were hosing annual Burns Suppers on 25 January. The celebrations were original only for men, the procedure was highly structured, and the menu has remained largely the same to this day (haggis consisting of sheep’s stomach lining stuffed with sheep offal, oatmeal and spices, is de rigeur).  However, ladies are now admitted 🙂

So what happens at a Burns Night Dinner?  Why don’t you join me at our very own Burns celebration hosted by our Scots friend Rory. Rory welcomed us with Culloden cocktails (champagne and Drambuie) and peat-smoked sea scallop and trout pate on oatcake canapes from Maclean’s Hebridean Bakery.  The smoked fish came from the wonderful Hebridean Smokehouse, a small family run business located on the island of North Uist.  (Uist is part of the Outer Hebrides, off the coast of the Scottish mainland).  The flavour that the peat imparts to the fish is quite extrraordinary and I was thrilled to see that the smokehouse also ships to the UK, Ireland, the USA and Canada!  From there, we took our places at the table where the traditional Selkirk grace (also attributed to Burns) was said. Traditionally, the meal would be all about the haggis, but we opted to precede our haggis with cullen skink, a thick Scottish soup made with smoked haddock, potatoes and onions. This was followed by what most people would regard as The Main Event.  Rory (as host and chairman) asked us to stand as he brought the haggis in on a platter. Usually the haggis-bearer would be followed into the room by a lone piper, but seeing as neither Nick nor Pete looked capable of mastering the bagpipes in 30 seconds, we went for some recorded bagpipe music!  As is traditional, Rory then recited one of Burns’ poems, Address to a Haggis and as he reached the line “An’ cut you up wi’ ready slicht”, he dramatically stabbed the haggis – if you think I am making this up, please watch the video of Rory addressing the haggis!

Once the haggis was well and properly addressed and stabbed, we all toasted it before it was served on a bed of clapshot (a traditional mash of boiled potatoes and yellow turnips or “neeps”).  An interesting question is what to serve to drink with haggis.  We kept it traditional and served Talisker whisky, but this combination may be the result of force of habit rather than good culinary sense: the high alcohol content of the whisky can exaggerate the peppery spices of the haggis.  Other suggestions include semi-sparkling wines, light-bodied reds or full-flavoured Belgian beers.

After the haggis stabbing, there was some light relief with traditional toasts – the menfolk (as represented by Nick) propose a sarcastic, sexist toast “to the lassies” (that would be, erm… me) and I replied with a sarcastic toast about how much women hate men.  Strange Mating Rituals of Scotland, Part XVI. Rory had outdone himself with the meat course – a roast rack of mutton marinated in Drambuie and home-made marmalade.  Drambuie is a honey- and herb-flavoured whisky liqueur made from aged malt whisky, heather honey and a secret blend of herbs and spices – the name means “the drink that satisfies” in Scottish Gaelic.  And how, you may well ask, is marmalade Scottish?  Apparently, since the 1700s Dundee has had a tradition of marmalade-making and was for many years the centre of the marmalade universe.  Fact! The lamb was served with the charmingly-named rumbledthumps, a combination of potato, cabbage and onion (similar to Irish colcannon). I had been put in charge of dessert, and since I had prior warning of the culinary delights that Rory was planning, I knew that dessert should be light and fruity rather than heavy and cloying.  Caledonian cream proved to be the perfect answer – booze-soaked orange segments with a zesty, creamy topping.  Highly recommended and supremely simple to make. As liquid refreshment, we had some wonderful Talisker 10 year old malt whisky, as well as Drambuie whisky liqueur liberally splashed on everything from the welcome cocktail, to the mutton, to the dessert.  With the mutton we had a rather fabulous bottle of 2001 Brokenwood Cricket Pitch Red, bought at the Henley Wine Fair in 2004 and now drinking just beautifully with full-bodied jammy fruit flavours and hints of liquorice.  And just because we were feeling adventurous, we rounded off the meal with some Vietnamese weasel coffee – and it was delicious.  Fact!

All in all, we ate and drank and made speeches for close on seven hours – I’m sure Mr Burns would have approved!  And the reason why you are getting to hear about our wonderful meal in such detail is because my lovely sponsors Foodbuzz selected me as one of the participants in this month’s 24,24,24 event.  Please do go and check out the other 23 posts as they appear during the course of the day tomorrow.

Heat the butter gently in a pan until melted and allow to cool for 5 minutes.

Depending on the texture you prefer, you can either use a food processor or a fork to mash up the scallops and fish while gradually adding the melted butter.  Mix until until the texture is as smooth or chunky as you like.

By hand, stir in the lemon juice and the lightly whipped cream and mix well. Place in a pretty serving dish and chill for 30 minutes before serving.  Serve with Scottish oatcakes (we used Nairn’s).

Cover the smoked haddock with water in a shallow pan, skin side down. Bring to the boil and simmer for 4/5 minutes, turning once.

Take the haddock from the pan and remove the skin and bones. Break up the fish into flakes, return it to the cooking liquid and add the chopped onion, bay leaf, salt and pepper. Go easy on the salt as the smoked fish will already be salty.

Simmer for another 15 minutes. Strain and remove the bay leaf, but reserve the stock and fish. Add the milk to the fish stock and bring back to the boil.

Add enough mashed potato to create the consistency you prefer – you are aiming for rich and thick. Add the fish and reheat, and check for seasoning.

Just before serving, add the butter in small pieces so that it runs through the soup. Serve garnished with chopped parsley, accompanied by toast triangles.

HAGGIS – I wouldn’t suggest you make your own haggis unless you are a fairly ambitious cook – ours was made by Scottish butcher Simon Howie and you will probably notice that it was in an inedible synthetic casing rather that a sheep’s stomach – quite good if you are squeamish abotu these things!  If, however, you are determined tp make your own, here is a recipe.

Mash the potatoes and turnips together while still hot and mix in the butter, chives and seasoning.  Serve piping hot.

Mix the Drambuie and marmalade.  Lightly score the meat and coat with the marinade.  Cover with foil and leave to marinade overnight.

Remove the racks of mutton from the marinade and season with salt and freshly ground black pepper. Heat a heavy ovenproof frying pan until hot, add a splash of oil and cook the racks until evenly browned all over.

Transfer to the oven and cook for 8-10 minutes, or until cooked to your liking. Remove the racks from the oven, cover them loosely with foil and leave to rest in a warm place for 10-15 minutes to become evenly pink.

Mash the potatoes and finely chop the cabbage and mix in a large saucepan in which the butter has been melted. Keep the saucepan over a low heat to keep it hot. Season to taste and serve piping hot.

The mixture can also be put into a greased oven-proof dish and cooked at 200C until the top is browned.

FOR THE CREAM:
300g smooth cream cheese
300ml double cream
2 Tbsp marmalade (thick, bitter marmalade is suggested but use what you have)
2 Tbsp Drambuie or whisky (plus more to soak)
2 tsp lemon juice
zest of 3 oranges
caster sugar to taste

FOR THE BASE:
4-6 oranges, segmented and the pith and membranes removed

Soak the prepared orange segments overnight in whisky or Drambuie. Place in the base of stemmed glasses and add a splash of Drambuie or whisky to each..

Blend all the ingredients for the cream in a liquidiser or by hand until smooth. Spoon the cream on top of the oranges. Garnish with some orange zest and serve chilled.