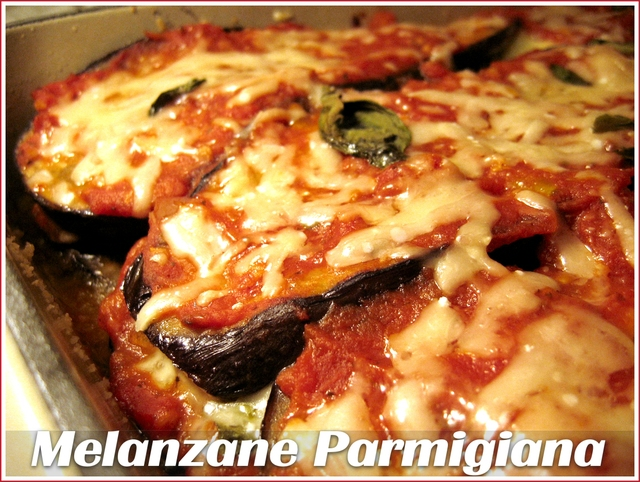 I must admit that I have been on a bit of an Italian binge lately.  Not surprising, seeing as recently at the very tail end of winter the universe suddenly played a mean trick on us and sent sleet and snow and general cold!  What can be more comforting on a chilly night than a rustic Italian meal?  Although I have not spent nearly enough time in Italy, I feel a connection with the country and its cuisine through my fab sister-in-law Paola.  Her enthusiasm for the food of her forebears and her flair for presenting it is a constant source of inspiration to me.  So what are we waiting for – let’s cook Italian!

The first of my Italian evenings was prompted by the discovery of a beautiful pair of very reasonably priced aubergines on our weekly grocery shopping trip.  Usually I just slice them, salt them to draw out some moisture and then fry them in a bit of olive oil – which is lovely but not particularly exciting.  For some reason, when I saw these two aubergines lying head to toe like a purple yin and yang symbol, I had a vision of eggplant parmesan.  It’s one of those things that crops up fairly regularly as a vegetarian option in restaurants and one that I’ve often eaten, but one of those things you seldom make youirself.  I also usually find it to be a relatively expensive dish to order in a restaurant, but having made it myself, I see where the money goes: into labour costs!!

But first a word or two about eggplants. There is some uncertainty as to where the plant originated, but it is suspected to be in Asia.  They gradually spread westwards and established a firm grip on Middle-Eastern cuisine (think baba ghanoush) – and when the Arabs occupied Spain and Sicily, their eggplants travelled with them.  This would explain why melanzane parmigiana is regarded as a Sicilian speciality:  the influence of Arab cuisine was far stronger there than in mainland Italy.  Increased trade also meant that eggplants soon became known throughout Europe, but there it seems they encountered a bit of a public relations problem.  You see, they are officially members of the (poisonous)nightshade family, together with the potato and tomato. For this reason, they were shunned by many Europeans in the 16th and 17th century as (at worst) poisonous and (at best) inducing madness, fever and epilepsy.  In fact the Italian name of melanzana“derives from the words mela (apple) + insana (unsound) – in other words “noxious apple”!  It was only in the 1700s that attitudes changed and dishes such as ratatouille became popular.

Speaking of names, just how many names does one vegetable really need??  Its Spanish name is la berenjena, derived from its Sanskrit name of vatin gana. So far so good, and a clear indication of its journey to our tables.  But in English, I have variously heard of it being called brinjal (its Indian name), aubergine (its French name), eggplant (its English name) and even melanzane (its Italian name, although this is rarer).  To this list you can also add eggfruit (Australia), garden fruit (West Africa), apple-of-love, Asiatic aubergine, Guinea squash, gully bean, pea apple, susumber – and even Sodom and Jew’s apple.

When buying eggplants, look for shiny plump fruit with no wrinkled skin.  The fruit should feel heavy for its weight (indicates a high moisture content) and should not have visible scars or bruises as these could indicate bruised flesh inside.  The condition of the eggplant’s green stem should also give an indication of its age – it should be firm and bright green.  Remember – the older the fruit, the more likely it is to have a bitter or acidic taste.  And on that topic, it is a long-standing practice to slice and salt an eggplant before cooking it.  Some say it is to draw out the bitterness, others say it merely draws out the moisture.  Either way, it does seem to stop the eggplant soaking up excessive amounts of oil during cooking (and believe me, these babies are like sponges!).  Although careful breeding means that few eggplants are terribly bitter these days, unless you are desperately trying to avoid salt, I would recommend salting before cooking (see method below).

As I mentioned above, despite the name seeming to suggest Parma, melanzane alla parmigiana is regarded as a Sicilian dish which probably has its roots in the time that Sicily spent as an Arab emirate after the Arab conquest of 827AD.  Although I served this dish hot as a vegetable side dish, it can also be served lukewarm as part of an antipasti platter  -either way it is tremendously comforting and truly delicious.  Buon appetito! 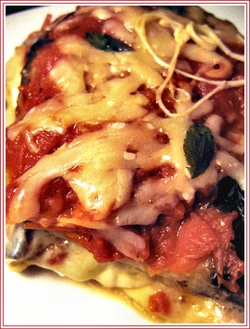 Slice the aubergine (I sliced mine lengthways to make for fewer pieces to fry!).  Salt on both sides and leave the slices to stand upright in a colander so that any bitter juices can drain away.

Prepare the tomato sauce – fry onion and garlic until soft but not browned.  Add the tin of tomatoes and a teaspoon of sugar (and a pinch of dried oregano if desired) and heat the sauce through.

Blot the slices of aubergine with kitchen towel.  Mix some plain flour with salt and pepper on a plate and  dredge each slice in the seasoned flour (both sides) before frying in the olive oil.  (The flour stops the slices from sticking to the pan – makes your life a *lot* easier!) Although some recipies suggest deep-frying, I shallow-fried mine and it worked just fine.  Each batch of slices takes about 4 minutes, turning once.  Drain the slices well on paper towels and keep warm.

Butter a baking dish (mine was about 30x18cm), sprinkle the bottom with toasted breadcrumbs, shaking off any excess.  Layer the aubergine slices, follwed by the tomato sauce, some fresh basil leaves, mozarella slices and grated parmesan.  Repeat these layers to use up all ingredients, finishing with sauce topped with only parmesan.

Cover the dish loosely with aluminium foil and bake at 200C until bubbly.  Can be served hot or cold, preferably with fresh bread for mopping up the juices.