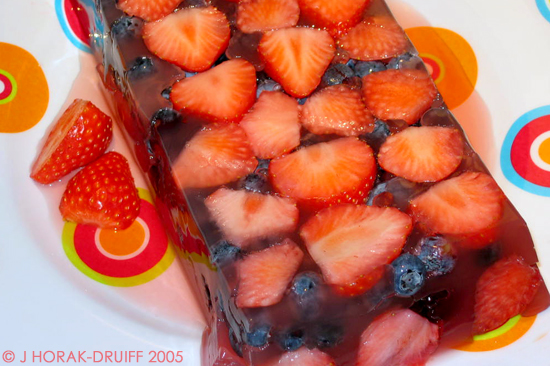 Where does the time go??  It seems like yesterday when I took part in my first IMBB – but when I checked the dates I saw that it was almost a year ago to the day!  I can’t believe that it’s been a whole year, and when I look back on my entries I cant believe how well my contributions have turned out, despite the fact that some of them took me significantly out of my culinary comfort zone. But of course, the minute you think that, you jinx yourself and hey, I guess I was about due for a disappointment…  But maybe I’m being too hard on myself.  Read on – you decide.

When Elise at Simply Recipes decreed the theme of this month’s IMBB to be “Has my blog jelled?” I was a little dubious.  I mean, jelly??  As in hospital food they give you after a tonsillectomy?  As in the luridly coloured stuff you’d crave as a kid but somehow lose the taste for?  As in the stuff I made with half water and half alcohol as a student, a fun way to have pudding and get plastered at the same time??  Okeydokey.  But then I started thinking of the other stuff you can do with jelly – terrines, mousses, panna cotta – and my first thought was to make a pudding my mom used to make.  Unsweetened condensed milk, orange jelly (as in Jell-O, not as in jam!), orange zest and whipped up egg whites.  Easy peasy.  But then I thought hell, that’s just too simple and besides, maybe the idea is to try and stretch myself a little and not use a packet of jelly for a change.  Yes folks, I’m a gelatine virgin (agar agar would be in the realms of the positively deviant!!).

So I thought it was high time I got over my gelatine apprehension and made something using it.  I surfed the net for a bit and came upon something that looked absolutely fab (Warning Sign #1) and appeared really easy – a terrine of summer fruits.  It’s credentials are also impeccable:  it’s from Delia Smith online, so I figured I was in safe hands.  And seeing as it’s summer and berries are beginning to reappear on the supermarket shelves, it seemed like an appropriate dish to make.  I looked forward to a slab of garnet jelly in which the rich bounty of summer berries were suspended, trembling slightly (the terrine, not me…) as it awaited the first eager scoop of my spoon.  And besides, what’s not to like about a dish that requires sparkling rose wine as its liquid base?

So far so good. Off to buy the ingredients.  Strawberries – check.  Blueberries – check.  Raspberries?  Erm, no.  But big blackberries so we’ll go with those.  Sparkling rose – check – a dry Cava rose.  Gelatine powder?  Not a granule (Warning Sign #2).  At this point I should have said that’s it – off to the desserts aisle for a packet of strawberry jelly.  But nooooo, I rummaged around on the shelf instead.  Two different brands of leaf gelatine, but since it was My First Time I had absolutely no idea how to convert the 2 sachets of gelatine powder that the recipe requires, into the equivalent amount in leaves, so abandoned that option.  OK, what have we here?  Vege-Gel from SuperCook, a vegetarian alternative to gelatine (i.e. no cow’s hooves, pig’s trotters or whatever) and… in powder sachets!  Sold.

Got home and started making the recipe.  When I got to the gelatine/Vege-Gel bit I read the packet, where I was told “Vege-Gel is a vegetarian alternative to gelatine not a substitute.  Okay, a little concerned by this but not too much.  They merely suggest that you follow the packet instructions carefully, not your gelatine instructions that the recipe contains.  Now the recipe says to bring the wine to a simmer and then whisk in the gelatine, while my packet instructions told me the Vege-Gel must be added to cold liquid and then brought to the boil.  No problem – we’ll add the Vege-Gel to the cold wine, bring it to a simmer and then whisk in the sugar, which I do.  My main concern was that the jelly would not set – the packet also said that although 1 packet would gel 750ml of liquid, acidic liquids (like, erm, wine and lime juice) might need 2 sachets for best results.  So of course I chucked in 2 sachets.  The powder fizzed up quite a bit in the lovely salmon pink cava and I diligently stirred it as I waited for it to simmer/boil.  But when the fizzy foam cleared, the colour formerly known as clear salmon pink had turned… well a sort of walls-of-an-institution opaque dusky pink.. Eeeewww.  Oh well, I thought, maybe it will clear when the mixture boils but noooooo, opaque dusky pink it stayed.  It looked like a chemical reaction, not a dessert, and didn’t look like it could exist in the same universe as Delia’s picture.  But it was Saturday night and all the berries were washed and ready and I wasn’t going to waste half a bottle of wine… so we soldiered on.  Now the recipe says to pour the wine/gelatine mixture into a jug to cool before pouring it over the berries in the mould, so I did this.  Did I say I was worried about the mixture setting?  HAH!!!  By the time I’d filled the mould with berries the stuff in the jug was a malevolent, solid, almost sentient mass.  Well OK, so maybe it wasn’t sentient.  But it certainly looked as if it had evolutionary aspirations.  And it had certainly formed a thick rubbery skin where it had been in contact with the air and cooled slightly.   Eeeeewwwww again.  But hey ho, we’ll just reheat it till it turns liquid again and press on, and that’s pretty much the story until the end of the recipe. Chilled the monster overnight and after our barbecue at Nick’s rowing club this afternoon, unmoulded it for dessert when we got home. And… it wasn’t as disastrous as I had imagined it might be! It certainly looked nice, even if not drop-dead gorgeous like Delia’s picture. The jelly still had that slightly disturbing opaque pink colour, but it didn’t look as noxious as last night – it may even have gone a teensy bit more translucent overnight. What I did find though was that the gel mixture had been too thick when I poured it over the berries – if it had been more liquid it might have got into the nooks and crannies around the fruit a bit more and held together a bit better. As it was, the terrine was sliceable, but tended to fall apart a bit, rather than the fruit suspended neatly in jelly slices as I had imagined. Maybe there was too much fruit, who knows. Also, predictably, the jelly had set to the approximate consistency of a stress-ball, i.e. not very quivery at all, so maybe next time less gelling agent of whatever description…! But as for the taste – it was lovely. A kind of a grown-up fruit jelly, with the tang of the Cava and lime juice and the sweetness of the berries. I served ours with vanilla ice cream but crème fraiche or cream would also be good. Would I make it again? Probably not – or if I were to, I’d use a packet of jelly and mix it with half booze. For the end result, I didn’t think it was worth going the Vege-Gel (or similar) route, but maybe I was just unlucky. Watch this space for future experiments in gel-land – I still have 2 sachets left…!

For those of you who feel you aren’t doomed to repeat my mistakes, I’m sure this could turn into a very successful party piece dessert for you, so here is Delia’s recipe:

35Og (12 oz) blackcurrants, redcurrants and blueberries – approx 110g (4 oz) of each or any other combination you like

First prepare the fruit: remove the stalks and halve the strawberries if they are any larger than a quail’s egg. Then mix the fruits together in a large bowl, being very gentle so as to avoid bruising them.

In a small saucepan heat half the rosé wine till it begins to simmer, then whisk the sugar and gelatine into it. Make sure that everything has dissolved completely before adding the remaining wine and the lime juice. Then pour the liquid into a jug and allow it to cool. While that’s happening, lay the mixed fruit in one of the loaf tins – and it’s worth arranging the bottom layer with the smallest, prettiest-shaped fruit as this will be the layer on top when the terrine is turned out.

Next, pour all but 150ml (5 fl oz) of the liquid over the fruit. Now lay a sheet of clingfilm over the tin, place the other tin directly on top. Put two unopened tins of tomatoes (or something similar to act as weights) into the top tin and put the whole lot into the fridge for about 1 hour, or until it has set. Then warm up the remaining 150ml (5 fl oz) wine mixture and pour it over the surface of the terrine. Re-cover with clingfilm and return to the fridge overnight to set firm.

When you are ready to serve, turn out the terrine by dipping the tin very briefly in hot water and inverting it on to a plate. Use a very sharp knife (also dipped first into hot water) to cut it into slices. Serve with chilled pouring cream, crème fraîche or Greek yoghurt.