You are here: Home / Recipes / Fish / Pesto and almond crusted fish – and TimTams from Australia! 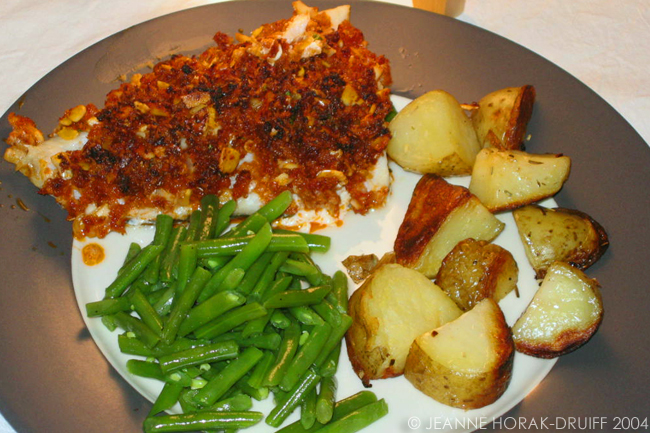 As I mentioned in my recent WBW entry, my friend Greg stayed with us for a few days last week. How I came to know Greg is not unusual – he is married to a friend of mine. However, said friend is my old Latin teacher from high school, and I do believe that long-standing friendships with teachers of Latin are a little more unusual!! Although they are both from South Africa, they have now been living in Sydney for about a decade and I don’t get to see either of them very often. So last week’s visit was something of a treat – made more so by the fact that Greg is a fully-fledged foodie.

Before he left Sydney for London, Greg asked if there was anything I wanted from Oz. Naturally, my mind turned to things edible. Nick and I have got into the habit of bringing food parcels back from our travels, to be enjoyed at leisure when we are back in London and reminiscing about our fab holiday, so I thought why not get Greg to bring us some food we can’t get over here (well, not without effort, anyway!). Something light enough to carry in hand luggage. Something quintessentially Australian.

Now I wish I could remember where I first read about Arnott’s Tia Maria Tim Tams and Kahlua Slices – I know it was on a food blog but for the life of me I can’t remember which one. What I do remember is that my first thought was “gotta have, gotta have!!”. Further reading led me to the controversy surrounding their introduction in Australia – this was the thin edge of the wedge, Arnott’s were turning children to drink, Arnott’s makes alcohol seem like something normal that can be consumed every day (erm, possibly it is?? Red wine, cholesterol and all that??). Suffice it to say my interest was piqued, so I asked Greg if he would bring me some Kahlua Slices and some Tia Maria Tim Tams.

Greg duly arrived last week, full of the joys of Quantas Business Class (grrrrr!), and with a bag full of treats. Since he is interested in giving me a more rounded view of Aussie cuisine (or giving me a more rounded physique, I’m not sure which!), he didn’t restrict himself to the requested 2 packets of biscuits. Oh no – I got a veritable smorgasbord of Arnott’s products: From the top, we have Double Coat Tim Tams, Tia Maria Tim Tams, Chewy Caramel Tim Tams and Kahlua Slices – a feast! But Greg did not stop there. He also brought me a lovely bottle of botrytised Semillon from Coonwarra and Bill Granger’s cookbook Bill’s Sydney Food. Heaven! A basket of choccie biscuits, a bottle of lovely sticky dessert wine and a recipe book to curl up with while eating said choccies and drinking said wine. What more could one want? Thanks Greg!

To repay him for his gourmet courier services, I pulled out all the stops in the kitchen last week. On Tuesday night, he got my boerewors and butternut squash risotto and on Wednesday we had Spanish wine for WBW2. As I was out of any remotely Spanish ingredients, I decided to make fish dish that could stand up to a red wine, which turned out to be cod with a red pesto and almond crust . I got the recipe from a very useful database on the website of Sea Harvest , a South African fishing company, who have accumulated a number of simple but impressive recipes for various types of fish. Although the recipe is intended for kingklip (and would surely be delicious with kingklip!) I used cod and it tasted wonderful.

After dinner, of course we had to try some of the Tim Tams. Went with Greg’s recommendation and tried the Chewy Caramel flavour. We opened the packet. The sense of anticipation was palpable. I like the size of the Tim Tams – not overwhelmingly large (I often want just a nibble of sweetness, not a whole loaf) but not disappointingly small either. Took a bite and found… good quality chocolate coating that actually melts in your mouth covering two lovely crisp dark chocolate biscuits which are sandwiched together with chocolate cream and caramel. What’s not to like?? I would serve this with coffee in lieu of dessert and I’m sure nobody would complain… except of course my limited supply would run out rather fast I suspect!

So maybe only for special friends…

FISH WITH A RED PESTO AND ALMOND CRUST (serves 2)

Spread one side of each fillet with pesto. Mix the remaining ingredients and spread over the pesto to form a crust. (ed. – I just mixed together all ingredients for the topping and spread that on one side of the fish, although it may look prettier if you follow the instructions!) Cover with foil and bake at 180C for 20 minutes. Remove the foil and bake uncovered for a further 5 minutes until golden brown.

As you can see from the picture, I served this with French cut fresh green beans which Greg tossed in olive oil and sprinkled liberally with freshly ground pepper, as well as oven-roasted potato chunks with garlic and fresh rosemary. It was heavenly! The tomato crust meant that the fish was not overwhelmed by the wine and a delicious meal was had by all.