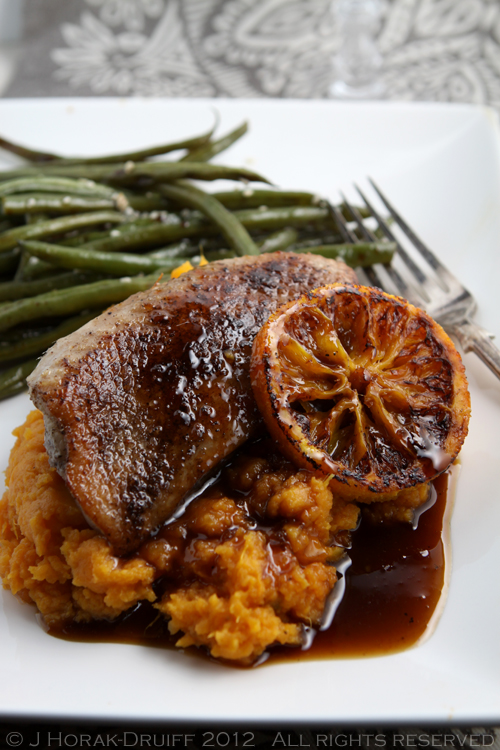 Christmas traditions – they’re a funny old lot, aren’t they?  For a start, how did the idea of a snowy Christmas with frost on the windows and northern hemisphere pine trees become so pervasive that you see shops in countries like my native South Africa (where Christmas falls in the middle of summer) giving their display windows a spray of mock “snow” and hang icicles everywhere? And in the centuries since Europeans brought the idea of Christmas to the southern tip of Africa you’d think we might have come up with an alternative and more native tree to use as a Christmas tree (a baobab, maybe?). Or maybe let our Santas dress in slightly more summery attire. But no. Every year we pretend to have Christmas in the middle of winter while the mercury is hitting 30 degrees Celsius outside.  It makes no sense!

Then again, quite a few other countries have equally nonsensical ideas:  the English and their coins baked into Christmas pudding, waiting to fracture an unsuspecting tooth; the citizens of Caracas, Venezuela, who attend morning church services between 16 and 24 December on roller skates; the Japanese who prefer KFC for their Christmas dinner (you can even book tables at KFC restaurants for the occasion!); or the Catalonians with their “pooping log” that “poops” sweets and candies on Christmas eve before being burnt in the fireplace. 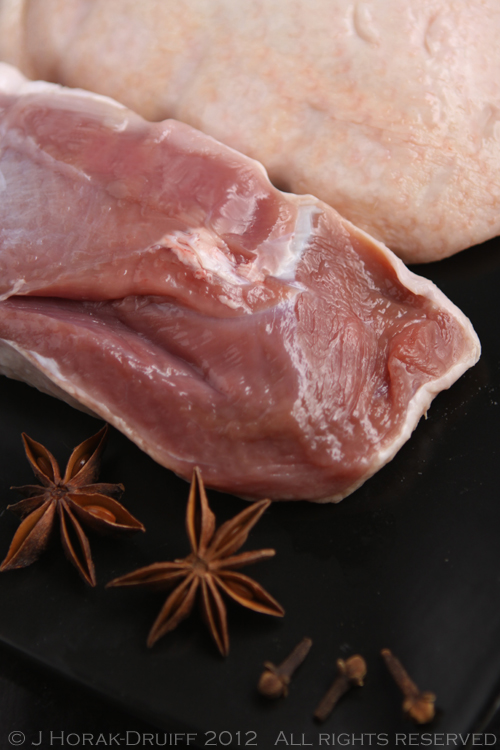 But here’s one that you may not be familiar with:  every year on Dec. 24 at 3 p.m., half of Sweden sits down in front of the television for a family viewing of the 1958 Walt Disney Presents Christmas special, From all of Us to All of You  (or  Kalle Anka och hans vänner önskar God Jul –  “Donald Duck and his friends wish you a Merry Christmas” – in Swedish). Kalle Anka has been airing without commercial interruption at the same time on Sweden’s main public-television channel on Christmas Eve since 1959 and consists of  Jiminy Cricket presenting about a dozen Disney cartoons from the ’30s, ’40s, ’50s, and ’60s such as some of the Silly Symphonies and clips from films like Cinderella, Snow White and the Seven Dwarves, and The Jungle Book.   The programme remains pretty constant year on year apart from a live introduction by a host and the annual addition of one new clip from the latest Disney-produced movie.  Kalle Anka is typically one of the three most popular television events of the year, with between 40 and 50 percent of the country tuning in to watch. The only explanation offered for the show’s special place in the hearts of Swedes is the fact that the show first aired in 1959, when Swedes were just starting to own televisions and the novelty value was huge.  For many years,  Christmas was also the only time when Swedes could see Disney animation on television. The annual airing has become no less a fixture of Swedish Christmas tradition than the Queen’s Christmas message is here in the UK – a comforting constant in a rapidly changing world. 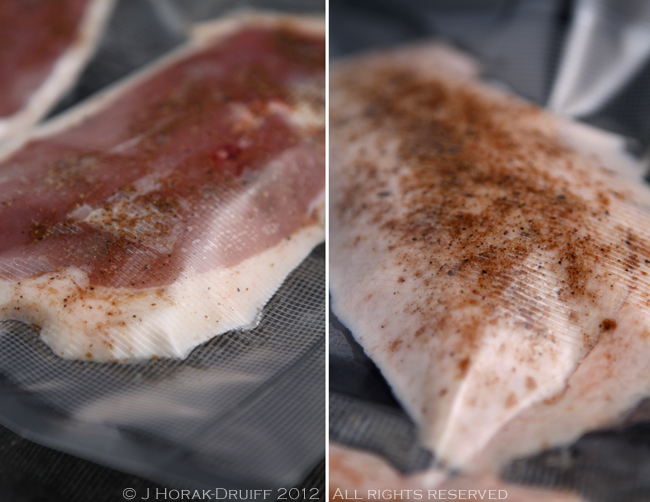 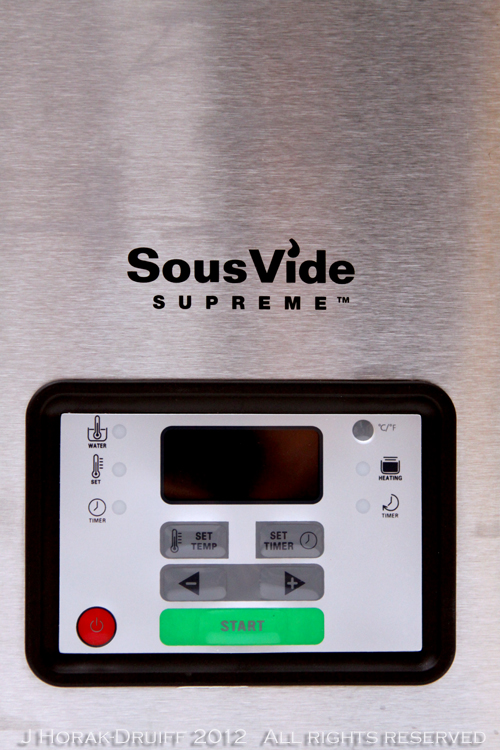 Much as I love Sweden, I do not think that the annual watching of Donald Duck and his friends is something in which I would voluntarily get involved.  You see, as far as I am concerned the main role that duck should play at Christmas is as the chief ingredient in the menu, not as the star of the entertainment!  For celebratory meals I have in the past cooked Nigel Slater’s fantastic whole roast duck with pancetta and potatoes and I was on the verge of repeating that last weekend when I remembered that I had a new toy to play with: my Sous Vide Supreme machine! For those of you who missed my detailed post on what sous vide cooking entails, it denotes a method of cooking where food is sealed in airtight plastic bags and cooked in a water bath at a carefully regulated constant temperature, for unusually long times and at temperatures much lower than are normally used for cooking.  It’s a great technique for making sure that bulky or awkward-shaped cuts of meat get cooked evenly all the way through (something you struggle to do with conventional cooking) and it works wonders on cheap cuts of meat, transforming them over time into something quite sublime.  But is it also a great method to use for cooking duck breasts that normally shrink to a fraction of their original size during cooking as the fat cooks out.  With sous vide cooking, all the moisture stays in pouch and some of the fat starts rendering out into the meat during the cooking process, meaning that the meat does not dry out and the breasts do not shrink.  Of course, one of the limitations of sous vide cooking is that the meat also does not brown, but a couple of minutes in a hot pan at the end of the cooking process sorts this out.  I wanted to give my duck breasts a slightly spicy yet Christmassy flavour, hence the Chinese 5-spice mix which is packed with the flavours of star anise and cloves.  The sauce is partly a take on the retro classic duck l’orange, and partly inspired by the charred orange and rum flavour combination mentioned in the 2013 McCormick Flavor Forecast which I recently previewed. The combination is as delicious as it is visually appealing.  I served my duck breasts on a sweet potato mash, also seasoned with a bit of Chinese 5-spice, with roasted green beans tossed in soy sauce and sesame seeds on the side.  And what I should have done was make a sound recording of the moans of pleasure that guests made as they took their first mouthfuls – the best endorsement a chef can hope for.  This would make a fantastic alternative to a roast for your Christmas meal, especially if you are looking for something a little different this year. 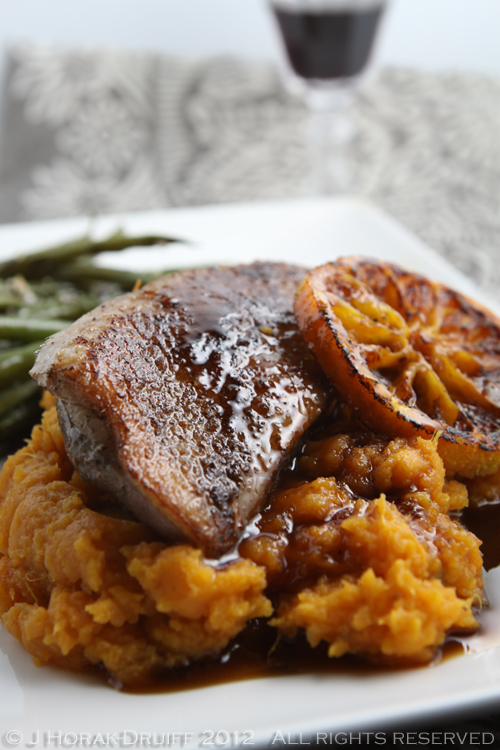